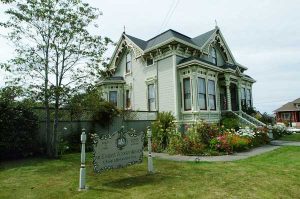 While Lori was rehearsing again, I went to the Ingomar for their Annual Garden Barbecue. Here’s the report of what I had:
Rabbit Sausage – Very good, I’m not sure if you could really identify what kind of meat goes into sausage anyways.
Barbecued Oysters – After trying mussels earlier, I thought I would give oysters a try too. Not as bad as the mussels, but still not something I’d be ordering.
Steamed Clams – These had a good butter sauce poured over them. Very tasty.
Quail Eggs topped with caviar – These looked like little hard boiled eggs cut in half. They had some tiny orange fish eggs on top of them. I’ll take your ordinary deviled eggs anyday.
Sweet and Sour Elk Meatballs – Delicious. I wonder if you can swap out the elk and use deer instead?
Assorted salads. – Pretty basic.

Open Pit Barbecued Moose Tenderloin – Tender was right! I think the guy cutting the meat heard me talking to one of the other guests about being a meat and potato guy so he cut me this huge slab of moose. As if there wasn’t enough to eat. But it was very delicious so I managed to eat it all.
Smoked Pheasant Raviolis – I don’t remember much about them. I think by the time I got to them I was stuffed.
Corn on the cob – Yep, that’s right, just plain old corn on the cob.
Danish Bleu Cheese Potatoes – Very yummy, completed the meat and potatoes portion of the meal.
Lobster Stuffed with Scallops – From the few bites that I tried it was very delicious. I see now why people rave about lobster. Unfortunately by then I was stuffed full of moose. Plus I saw the dessert coming and people were already raving about it.
Apple Brandy Cobbler with Buttermilk Cinnamon Ice Cream – Finished off the meal with a delicious concoction. Wish I had the recipe.

So that’s like twelve courses that I downed. I don’t know how I managed it except that most of it was so delicious I had to try.