Finding the KZ400 a bit small for two up, we bought this rather rare bike. This was Yamaha’s first attempt at building a touring bike. They sold two versions, one based on the XS1100, and this one based on the XS850. Unlike the later V4 tourer, these were called Venturers, not Ventures. The picture on the right was taken on a trip up the Oregon coast in 1981. 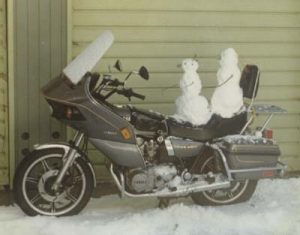 Venturer in the Snow at Bass Lake.

It wasn’t always bad weather with this bike, but this was the worst. On another trip to Bass Lake in early spring, the weather turned nasty. Here, it’s parked in front of my uncle’s lakeside cabin. It got so cold I couldn’t get it started so we had to warm it up in the garage. Then I had to drive it up a very, very steep driveway that was covered in snow.

I had my first crash on the street on this bike which nearly totalled it even though the damage was mostly related to broken plastic. After the crash I decided I wanted a lighter, better handling bike and so it was replaced with the 1982 Vision.

I think I ended up putting about 24k on this bike.