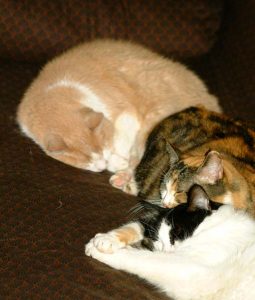 In a rare moment of bipartisanship, Fred and Meg laid down their differences and took a nap together. Fred, long known as a crodgy old Republican, and Meg, a liberal leaning, feminist, Democrat, are often seen debating their positions with each other. Usually Fred tries to avoid these debates whenever Meg enters the room, but quite often Meg will launch a surprise attack. Galen, being Meg’s loyal son, but also Fred’s best buddy (in his own eyes anyways), has tried to remain neutral and has registered as an independent. This independent streak was evidenced earlier this week when he managed to go awol for a good part of the day because a certain person didn’t keep tabs on his whereabouts. I won’t name names, but I can state with absolute confidence, that for once, I am blameless. Fortunately, he is better about returning than Fred was.