One of the first things Lori and I did upon moving into our 1888 Victorian on Rose Ave was to plant some roses along the avenue. Logical right? We went to Miller’s Farm Nursery and selected enough Cécile Brünner and Gertrude Jeckyl roses to alternate them all along our front fence. We also bought three apple trees and three blueberry bushes. We spent a wet weekend getting everything in the ground, and then to our horror, we watched everything disappear. By the end of the week only a few of the rose bushes were hanging on. Seems we learned a hard lesson that winter, gardening in the country is a lot harder than gardening in the city, especially when there are 12-15 deer hanging around all the time.

After we had the first of many floods hit our garden, we decided to build a short retaining wall and then build a rose arbor fence on top of that. DCI Builders poured the foundation in March of 2004. We had lots of other projects going on and so progress on the fence went in spurts, with long breaks where no progress was made. I’m sure our neighbors wondered what was going on, but in addition to other house projects taking up our time, Lori’s developing medical conditions started taking up both time and money.

From 2004 to 2010 progress was slow but it was finally completed when the last of the 365 pickets was attached. Before the foundation was poured we dug up the remaining few rose bushes and transplanted them to the backyard. We tried to keep them safe from the deer with netting. Finally with the fence completed, it was time to move them back, and by then we only had one Cécile Brünner and one Gertrude Jeckyl left. The one Cécile Brünner was planted on the right side of the gate, and over the years I took cuttings from it to propagate 16 other bushes. The one on the left side of the gate was donated by Mary Hubner as a very mature bush.

In 2011, with the garden secured by the arbor in front and deer fencing on the other 3 sides, we started planting the rose garden. Currently we have over 50 roses planted.

May 2011 – Beginning to plant the rose border

For a couple of years it looked really nice as more and more roses were planted and they started filling in. The arbor also provided a great place to hang Christmas lights which were visible from quite a distance down Rose Ave. in both directions.

We had a setback in December of 2012 with a major flood that did a lot of damage to the yard, and took out our deck and heating system. It also drained our finances getting some of the damage repaired.

But the next summer I dug out the 6-8″ of silt left by the two floods and started putting the rose garden back together. During the next couple of years the roses really took off, and their display each spring was awesome! Working in the rose garden was a delight as the Cécile Brünner is a very fragrant rose, and with 18 mature bushes we had thousands of them in bloom at the same time.

The roses got so vigorous that one violent windstorm in December of 2015 managed to crack six of the 4×6 upright posts. It didn’t help that I had just recently had a bad motorcycle accident and couldn’t get out to prune them or stabilize the fence.

Once I had healed I tried fixing the posts in place but the next winter the cracks reappeared so it was evident I was going to have to replace the posts.

Then in 2017, right in the middle of their big spring bloom, Gerry Miller ended his drunk driving rampage through Ferndale by plowing into the fence, taking out the most expensive part of it. He also almost obliterated the one original rose bush that all the others were propagated from, but with a bit of tender care I was able to save it and it’s now doing quite well. As the video from our home security camera show, he also narrowly missed hitting one of our cats who was sitting in the area. The video shows the speed that he hit our fence, and I’m glad we had the concrete foundation there and several big posts or else he probably would have been in our house. I was also thankful he didn’t take out the boxwood hedge because it takes so long to grow one of those back. The video also shows that he was trying to back out of our fence, this after he had already hit two other cars and a fence in town after leaving the Palace. He was arrested on scene and is currently still awaiting trial 14 months later.

Since he already had his license suspended due to a prior DUI, he of course was uninsured. He promised to pay us back for the damage, which of course he has failed to do. Our homeowner’s insurance deductible is $3000 and I estimated he did about $3200 of damage so it wasn’t worth submitting a claim. For over a year we lived with bright orange safety net obstructing our front entryway, while I waited to see if he was going to pay or not, and I really didn’t want to build it a second time so I tried finding a contractor who would be interested in the project.

Fence guys didn’t want to do it because it wasn’t the type of fence they normally do, and the general contractors I contacted were all too busy to be interested in it. So I started planning how I was going to rebuild it. I decided to do it in stages. First I removed the top part in complete sections, so I could later reuse them elsewhere in the yard. Then starting at one end, I took off each picket section in a unit and replaced the posts with new one. After replacing each post I would then rehang the picket section and go on to the next one.

Taking everything apart I found that the fasteners had severely corroded after just 12 years. So I rebuilt it using all stainless steel fasteners. The screws I bought locally at Valley Lumber, but the large bolts, nuts and washers I ordered online from the Bolt Depot.

One year after it was demolished, I finished the framing for the entryway and rehung the gate. I had to have several of the spindles remade. Dane Cowan made the original ones, but the new ones were made at Mad River Woodworks. Steve Courtemanche made the original gate for me, and salvaging what he could from the debris, he rebuilt it to match the original. The Farm Shop in Ferndale welded on some new brackets as Jerry completely sheered them off so there wasn’t anything left to attach the posts to.

With the design changing to a double column setup, it meant I needed to construct new crossbeams, and redo the entire top part. Here are the steps that I used to fashion the crossbeams, which were made from 4×6 redwood con heart.

With the extra column, the fence is much sturdier, and I can’t budge the posts at all by pushing against them. I think at this point if it blows down again, it means we had a hurricane.

All that’s left to do now is repaint it, which I’m not looking forward to. It means I’m going to have to cut the roses way back again. It was certainly easier building it the first time without those thorny rose bushes in the way. By the time I was done, I looked like I had been in a cat fight, scratches everywhere!

The old pieces from the top of the arbor got recycled into the deer fence that borders the veggie garden. We plan to grow some lighter weight vines on them, probably clematis which should do fine. 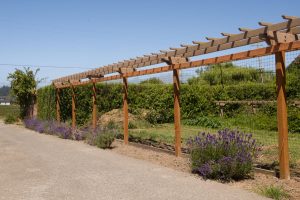