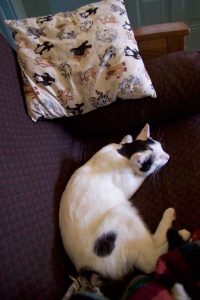 When Artie first came to visit our house, he had a wound on his tail, and it never really healed. Last week it seemed like it was getting infected, so we took him to the vet, and while he was getting his tail fixed, he got something else fixed. Well, that’s what they call it. I don’t see how that really fixes anything, just the opposite really. So since he was on antibiotics we kept him inside for the last week. Fortunately we found out he’s familiar with using a litter box, although he’s not aware that polite cats cover up their deposits. We also found out that the speed of smell in a room with no breeze is approximately 6 inches per second, calculated by the amount of time difference between when the person sitting closest to his box goes “ewwwww” and the person sitting farther away gets a clue about what the “ewwww” was about. Artie’s odors weren’t just from the liter box, he seemed to be having an excess gas problem that was venting at inopportune times. Hopefully this is just related to the antibiotics he’s on.