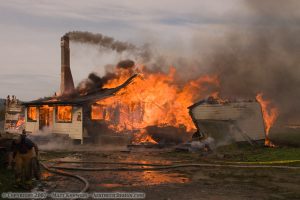 The day started out cold and wet, with even a short hailstorm, but the practice burn went down as scheduled. My plan for the day was to run the engine most of the day, and take one trip into the house. Unfortunately, I got up to the front door several times but for various reasons never made it to fighting the fire. My last try I got in the house and was just heading to the fire when they called everyone out of the house for good. So then we sat back and watched the two-story home burn to the ground. It was pretty funny when the chimney started smoking. It had a fireplace up on the second floor and enough material ended up there that there was a little fire still going in the fireplace, long after the entire second floor had burned away.

When I first heard we were going to be burning a Victorian I had real mixed feelings. We were long overdue for a practice burn because a lot of our newer members haven’t been in a live fire situation. When I finally got a look at the house though I was a lot more comfortable with the thought of burning it. The house was never a real showpiece and it had been neglected and remodeled to the point that it was barely recognizeable as a Victorian. The owners salvaged the nice staircase, and the day before the burn I pulled out some trim pieces that match our house. So I tend to think of it as being an organ donor, it’s life had passed but parts of it will live on.