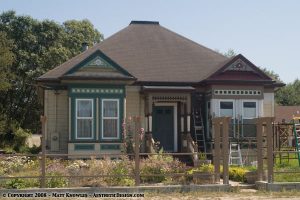 As I’m making my way down the bay window, one more element of the new color scheme became evident. Another touch of blue showed up on the squares above the windows. In designing the color scheme, I have reversed the traditional way of applying colors. Normally the darker colors are used for the parts that recede, such as the window sashes. But since the windows in our house had been replaced with white vinyl sashes that wasn’t going to be possible. And since we wanted the house to be dark brown, it made sense to just reverse everything so the body is dark brown, the trim is tan, the window surrounds and panels are cream. That left the placement of the two accent colors and I finally decided on this theme; if it was a horizontal line it gets the read treatment, and if it is a repeating element like the squares or the balls on the gables, it gets the blue treatment.