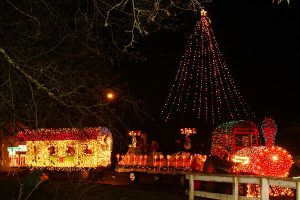 Miracles happen. All day today the rain has been pouring down sideways. I really didn’t think that I would be able to photograph the lighted tractor parade at all which I was worried about because I had told the editor of the Ferndale Enterprise that I would provide pictures of the parade since she was going to be in it and couldn’t take the photos herself. About an hour before the parade the rain started letting up enough that I thought I would try wrapping my gear in a plastic bag and at least try to squeeze off a few shots. Then just a few minutes before the start of the parade it stopped raining completely, and we ended up having a beautiful, relatively warm evening to watch my favorite Ferndale spectacle. The number of entries was down from last year but the Bansen’s were back with their train. This year it was the Bipolar Express, and it made it through the whole parade even though it was limping with a flat front tire and a generator that kept quitting. Truly the engine that could.