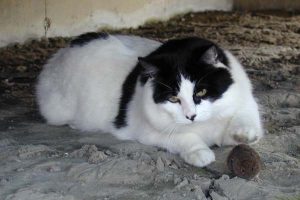 Tonight I was working at the office late when I received a call from Lori, who was obviously frantic. I could hear Galen wailing in the background, and Lori said he just started doing that all of the sudden. I had her call the vet and I rushed home and picked them both up and then we rushed off to the vet’s office. The vet did a quick physical exam but there wasn’t any clear indication what the problem was. Galen had been inside for a couple of hours before the problem started. Within about a half hour of when it all started, Galen passed away as I was holding him so the doctor could work on him. We’re still waiting for some final blood tests to find out what happened, but the doctor is suspecting he injested some type of poison. Galen is survived by his three brothers, Ricky, Cairo, and Rocket. His passing also leaves our home with three cats, Ricky, his mother Meg, and Trevor, who makes our house his home more often lately.

Galen came to us in 1998 when we returned home from vacation to find the feral cat who visited our house had a litter of 4 boys. We were able to catch the four boys and later their mom, who transformed from the unnamed wild feral cat to Meg, one of the best lap sitters we’ve ever had.

Galen was named for Galen Rowell, the famous photographer and mountaineer, because we noticed early on he liked to climb on top of things. His brothers were: Ricky, named because he looked like Ricky the stuffed cat we had, and who completed the I Love Lucy quartet, Wedgewood, who I caught after he got stuck in a wood fence while trying to escape, and Einstein, who had some crazy hair as a kitten. Wedgewood and Einstein were adopted by my brother Derek and were renamed Rocket and Cairo, respectively.

Galen’s early days were recorded on film and maybe some day I’ll get around to scanning them, but here are a few favorites from the digital era. 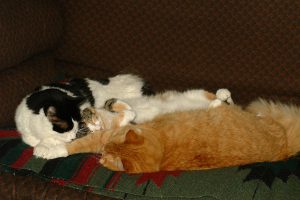 Galen and Ricky cuddling with their mom, Meg in the middle.

And here’s the drunk version. 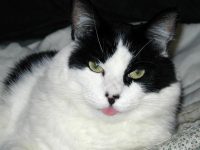 Galen had a habit of sticking his tongue out. Here’s the sober version,